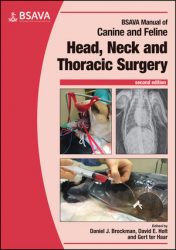 This manual provides a practical, up-to-date approach to head, neck and thoracic surgery in dogs and cats. The chapters flow logically from the required surgical instrumentation and then into surgery, starting at the oral cavity and nose and working caudally. Each chapter describes diagnosis and treatment, with step-by-step operative techniques for selected procedures.

Daniel J. Brockman, BVSc, CertVR, CertSAO, DipACVS, DipECVS, FHEA, MRCVS, graduated from the University of Liverpool in 1987 and returned for a residency in small animal practice after 18 months in practice. Daniel gained an RCVS Certificate in Veterinary Radiology in 1990 and a Certificate in Small Animal Orthopaedics in 1991. He moved to the University of Pennsylvania in 1991 as a lecturer in surgery, and became assistant professor of surgery in 1994. He became a Diplomate of the American College of Veterinary Surgeons in 1999 and a Diplomate of the European College of Veterinary Surgeons the following year. Daniel joined the Royal Veterinary College as a lecturer in soft tissue surgery in 2000 and became professor of small animal surgery in 2007. He is currently Director of Cardiothoracic Animal Surgery at the RVC and President of the European College of Veterinary Surgeons.

Gert ter Haar, DVM, PhD, DipECVS, studied at the Faculty of Veterinary Medicine in Utrecht, where he graduated in 1997. He became a Diplomate of the European College of Veterinary Surgeons in 2002 and Head of the ENT Department at the University of Utrecht in 2003. Gert became President of the International Veterinary Ear Nose and Throat Association in 2009. He joined the surgical team at the Royal Veterinary College in 2011, where he worked as a senior lecturer and subsequently associate professor in soft tissue surgery, and Head of the ENT Department and ENT, Audiology and Brachycephaly clinics. He currently works in a private specialist referral centre in Utrecht.